KIITEE Admit Card (केआईआईटी प्रवेश परीक्षा हॉल टिकट) 2017: Candidates who have successfully registered for the Kalinga Institute of Industrial Technology Entrance Exam 2017 until the last date will be able to access their KIITEE Hall Ticket 2017 between the dates 01st April to 05th April 2017. Candidates need to carry the exam call letter while appearing in the examination. The exam will be conducted on 14th to 23rd April 2017 and hence the candidates are informed that they need to carry a valid photo identity proof along with the hard copy of the admit card. Candidates need to download the KIIT Entrance Exam Admit Card 2017 by following the procedural steps mentioned below. 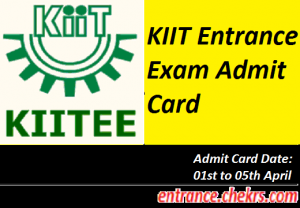 Candidates will be made available with the direct link from where they can download the KIITEE Admit Card 2017 that can be accessed by following the steps below. The admit card will be released on 01st April 2017 and then the candidates will be able it until 05th April 2017. At the exam center, the identity verification may be just before the exam, so you need to carry a valid identity proof with call letter at the exam center. Without the call letter, candidates will not be allowed to appear in the exam. The Permission Letter of KIITEE 2017 carries all the information about the applicant as well as the exam.

The Hall Ticket of KIITEE 2017 will be provided only for those students they have been applied the application form of exam successfully before the last date of the application. The KIITEE Admit Card 2017 will be provided online at its official website between the dates 01st April to 05th April 2017. Candidates should make it sure to carry the KIIT Entrance Exam Hall Ticket 2017 while appearing in the examination. The exam will be conducted on 14th to 23rd April 2017 at various exam centres. For any of the issues concerning the KIITEE Hall Ticket 2017, you can contact us by commenting at the end of the post, we will respond you as soon as possible with the most optimal solutions.