IPU CET Admit Card 2017: The Indraprastha University Common Entrance Test is conducting by the Guru Govind Singh Indraprastha University (GGSIPU) every year for undergraduate applicants admission in various engineering courses. Only those applicants are eligible to download IPU CET 2017 Admit Card, who have successfully applied for the IPU CET Entrance Test until the last date, i.e. 04th April 2017. The IPU CET B.Tech Hall Ticket 2017 will be released at ipu.ac.in on 16th April 2017. It is compulsory for all applicant to carry the IPU Common Entrance Test Admit Card 2017 along with photo identity card in the examination center. This year the IPU CET will be conducted on 23rd April 2017. 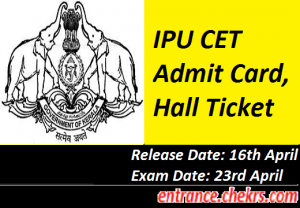 Applicants can download the IPU CET B.Tech Admit Card 2017 from the official site of Guru Govind Singh Indraprastha University (GGSIPU). The permission letter on CET has all the Basic information of exam like- Candidates Name, DOB, Photo/ Signature, Exam Day/ Date/ Time etc. After getting the admit card applicants need to read all the given instruction which is available on admit card and also follow in the examination hall.

Interested and eligible applicants who filed the application form they can refer this following dates for the further common entrance test admission process. Following are the Important Dates of IPU CET 2017 which is given as follow.

Through the admit card applicants will get all the basic information of IPU Common Entrance Test like Day/ Date/ Time of examination etc. The dates for the IPU CET 2017 Admit Card releasing has been declared and hence the candidates will be able to download the IPU CET hall Ticket 2017 either by following the steps or the direct link given above from 16th April till the examination date. The IPU Common Entrance Test will be conducted on 23rd April 2017 at its various exam centres. Applicants have to keep the IPU CET B.Tech Hall Ticket 2017 hard copy safe and then they need to carry it along with a valid photo ID proof while appearing in the exam. For any type of assistance, while downloading the IPU CET B.Tech Call Letter 2017, ypu are invited to contact us by leaving your issues at the end of the post.