UPESEAT Counselling 2017- यूनिवर्सिटी ऑफ़ पेर्ट्रोलियम एंड एनर्जी स्टडीज बी.टेक काउंसलिंग 2017: The University of Petroleum and Energy Studies is all set to conduct UPESEAT Counselling 2017 for the candidates who have appeared and qualified UPESEAT 2017 or JEE Main 2017. The UPESEAT Counselling Procedure 2017 will be held separately for granting admission in various department of undergraduate engineering courses. The 80% of the total seats will be offered for the admission to the candidates who have qualified University of Petroleum and Energy Studies Engineering Aptitude Test 2017 and the remaining 20% of the total seat will be offered to the candidates who would have qualified JEE Main 2017. The UPESEAT 2017 Admission Form will be available on the official website in the 3rd week of June 2017. 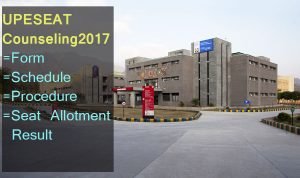 The university of petroleum and energy studies is availing admission opportunity to the candidate who meets the UPESEAT Eligibility Criteria. The university is located at such a place of Uttarakhand which is enriched by natural beauty, Dehradun. When the UPES B.Tech Counselling Schedule will come to its conclusive state, each one of the eligible candidates will get a confirm seat in one of the branches of engineering course through the release of UPSEAT Seat Allotment Result 2017.

The applicants who find themselves eligible are strictly advised to participate in such one of the Leading Universities Admission Counselling. After the announcement of the UPES 2017 Result, the selected candidates will be informed through the SMS or email service of communication. Later, They will have to report in person to the university for document verification and fee submission process. Alt last they will get a confirm seat in one of the branch of the engineering.

The applicants would require paying a certain amount as registration fee to appear in the counselling process.

All of the selected candidates will be called one by one for filling the choices of the branch of engineering. Their choices will be considered as per their rank scored in JEE Main 2017 or UPESEAT 2017 entrance examination.

Kindly, carry all the following mentioned documents along with you for the verification process

The UPESEAT 2017 Merit List will be released on the official website in either the last week of June 2017 or First week of July 2017. As soon as the UPESEAT 2017 Seat Allotment Result get announced we will update the same on this site also.