NDA 2019 : National Defence Academy (NDA) Exam is a national-level entrance exam conducted by UPSC (Union Public Service Commission) to recruit candidates in the Army, Navy and Air Force.  This exam is held twice in a year i.e. NDA I and NDA II. NDA I Exam will be conducted in the month of January while NDA II will be held in the month of August. 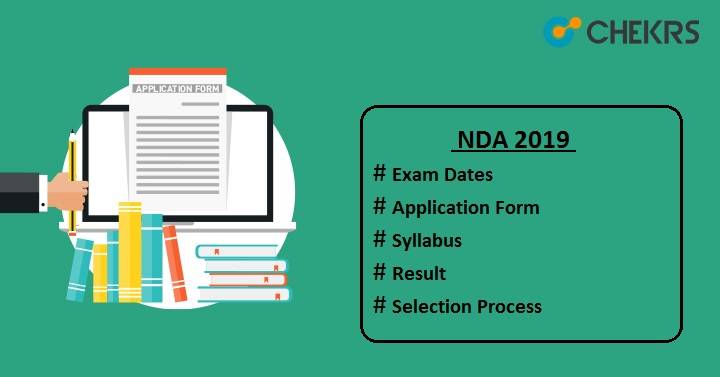 Candidates, who will appear in NDA, will have to first qualify in the written test and then have to clear the SSB interview round to get admission in the NDA that is located at Khadakwasla near Pune, Maharashtra. Read this article carefully and get all details related to the NDA exam.

Candidates who will take the NDA 2019 exam, check the NDA Exam Dates here. Both NDA I and NDA II will be held on different dates.

Get latest updates via SMS and Email


Students, who are thinking to apply for NDA exam, must check the eligibility criteria first. NDA Eligibility Criteria will be available on its official portal released by UPSC. Candidates without satisfying the criteria will be not allowed to appear in the exam or for further admission process.

Here we have listed the NDA Admission Criteria, check it.

The official authority will release the online application from on its official site. All eligible candidates can fill the NDA I and NDA II Application Form and able to take part in the entrance exam of NDA. The form filling process will be done in 2 parts i.e. first part fill the NDA Registration Form with candidate’s personal details and in the second part, they will have to select the exam, upload scanned images and then pay the examination fee.

NDA Application Fee will be Rs. 100/- for all candidates. Reserved categories candidates (SC/ST), Sons/ Daughters of JCOs, NCOs & Ors can fill the form without paying the fee. Applicants can make payment through online mode via credit card/ debit card/ SBI net banking or through challan of SBI bank.

To become familiar with the NDA exam, it is mandatory to know the NDA Exam Pattern. It will help you know the no of questions asked from each sections, marking scheme, mode of paper, time duration etc.

Check the following exam pattern of NDA to make a better effort in the examination.

Candidates should check NDA Syllabus Pdf before start the exam preparation. It will help them to achieve the qualified marks in the NDA exam. The syllabus will be prescribed by UPSC official authority.

Check the topics asked in NDA exam in the table given below for better preparation.

Candidates who are going to appear in the NDA exam should now start their preparations. Follow the NDA Preparation Tips given below to crack NDA 2019.

After completing the registration process, candidates can download NDA Admit Card 1 or 2 week before the exam date. It will be available to all students who will register themselves successfully through online process. To download the NDA Hall Ticket, candidates will have to login to their account with the login credentials. Don’t forget to bring the admit card while appearing for the exam. Without it, no one will be permitted to enter in the exam hall.

After conducting the exam successfully, NDA Answer Key will be released within a week. The exam conducting authority will not publish any answer key.  It will be uploaded by various institutes on the respective sites.  With the help of answer key, candidates can estimate their score.

The result will be declared within 15 days after conducting the examination by official authority. It will be uploaded on the official website of NDA i.e. https://www.nda.nic.in/

Follow the steps to check the UPSC NDA Result 2019

The cut-off will be released after announcing the results through the online mode. NDA Cut Off will be the minimum marks required to qualify both rounds (Written test and SSB interview). It is necessary to score the maximum marks to be eligible to take part in the interview rounds.

Candidates who will clear the exam will be qualified for SSB interview round organized by the Services Selection Board (SSB) of the Ministry of Defence for admission to Army, Navy and Air Force Wings of the National Defence Academy. NDA Selection Process will be done on the basis of student’s performance in the written test and SSB interview & medical fitness.

After concluding the SSB Interviews, the final result will be announced and then within fifteen days from the date of releasing of final results, candidate’s NDA Mark-sheet will be uploaded on the UPSC official website.