NATA Syllabus (नाटा सिलेबस, परीक्षा पैटर्न, सैंपल) 2017: The National Aptitude Test in Architecture will be conducted in two parts, first is Drawing Test and second are General Aptitude & Mathematics. The aspirants have to clear the cutoff of both the exams for the admissions in B.Arch. It is a national level aptitude exam which conducted by Council of Architecture. The drawing test will be held to measure the strengths of the aspirant to sense of perspective drawing, sketch a given object etc. Mathematics and general aptitude will be conducted to check the mental ability of the aspirant. The National Aptitude Test in Architecture 2017 Syllabus for Drawing test, general Aptitude and mathematics are given below in the article. Aspirants who are going to appear in the NATA 2017 exam they must start their preparation according to the NATA 2017 syllabus, exam pattern. With the help of syllabus and exam pattern, candidates will be able to prepare all the topics according to the marking scheme of the NATA. 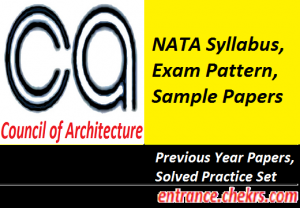 There will be two parts of the exam and both the paper will be conducted in an Offline mode. Aesthetic Sensitivity test i.e. General Aptitude Test, mathematics subject is also introduced. For each paper 90 minutes will be given and 62 questions will be asked in the exam.

The sample paper for NATA 2017 are made for the aspirants to practice as the examination format and the sample paper is just similar to the actual exam pattern. The NATA 2017 Sample paper will cover the general aptitude, mathematics and drawing for the B.Arch. admission exam. Aspirants must have a habit of solving sample paper, by solving and continuous practice they will be able to score well in the NATA exam. NATA 2017 Model paper are available on the official website of National Aptitude Test in Architecture, aspirants can download the model/sample papers and can start preparing for the exam.

The aspirants who are going to appear in the NATA 2017 exam they must start their preparation according to the NATA syllabus and exam pattern. They can download full NATA 2017 syllabus from the official website and they can also download the sample papers from the official website for the practice purpose. For more queries and feedback regarding the NATA 2017 Syllabus/Exam Pattern, you can contact us by commenting in the comment section given below.