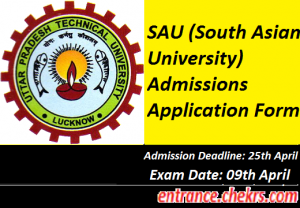 South Asian University is a very reputed university. It is established by the countries which are the member of south Asian Association for Regional Co-operation (SAARC). SAU attracts the applicants from all the SAARC countries. It is located in the Chanakyapuri region of New Delhi, India. South Asian University offers various courses for the students for both Master’s and Ph.D. programs in Economics, Computer Science, Biotechnology, Applied Mathematics, Sociology, International Relations, and Legal studies.

South Asian University has announced its admissions for Masters and Ph.D. programs. The entrance exam will be conducted on 09th April 2017. Aspirants are required to submit their SAU 2017 Registration form by 26th March 2017. There are some step given below for the filling and submission of the SAU registration Form.

Admit Card for South Asian University entrance exam 2017 will release in a week before the examination. Applicants download their South Asian University Admissions 2017 Admit Card from the official website of the university. Aspirants have to type their name and registration number to download their admit card. Without admit card no student will be allowed to enter the examination centre. Aspirants also have to bring their photo identity with their admit card on the day of examination for proof.

The admission in the south Asian University for PG and Pprogramsammes are open now. Aspirants who are willing to take admission in South Asian University can apply for the South Asian University 2017 Application Form on their official web portal. The students from all the SAARC countries can apply for the examination. The last date for the submission of the registration form is 26th March 2017. Exam will conducts on 09th April 2017.The selection of the students will be done on the basis of entrance test scorecard and the marks obtained by the candidate in the interview. For more queries regarding the SAU 2017 Application Form, you can contact us by commenting in the comment section given below.