JEE Advanced 2017 Application Form: JEE Advanced is a national level entrance exam which is conducted by Joint admission Board. JEE is conducted for the students seeking for the admissions in bachelor’s, integrated master’s and dual degree programs in IITs and ISM. JEE advanced 2017 will be conducted by IIT Madras. Aspirants can give JEE exam 2 consecutive times. JEE main 2017 Exam will be conducted on 2nd April 2017. The results for JEE main 2017 will declare on 27th April 2017. The JEE Advance 2017 Registration Form will commence from 28th April 2017. The deadline for the submission of online form is 02nd May 2017. JEE advanced will conducts on 21st May 2017 in two sessions first is morning session (9-12) and second is afternoon session(2-5).Aspirants who will qualify the JEE main 2017 exam will only be qualified for JEE Advanced 2017. 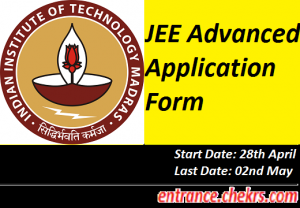 For Centres in India

For Centres outside India (Dubai)

Courses Offered by IITs in India

JEE Advanced is the second round after JEE Mains for getting the admission in various IIT’s located all across the country. The examination date for the JEE Advanced has been released for the year 2017. The submission of the JEE Advanced Application Form 2017 will be started from 28th April 2017 and the candidates will be allowed to register themselves until 02nd May 2017. Candidates who have applied successfully for JEE Advance Exam 2017, will be called to appear in the exam that will be conducted on 21st May 2017. After the conduction of the examination, the JEE Advance Result 2017 will be released on 11th June 2017.

Aspirants who will qualify the JEE Main 2017 will be able to fill the JEE Advanced 2017 application form. The JEE Advanced 2017 Online Application submission will start from 28th April 2017, the very next day after the result declaration of JEE main 2017. Aspirants can submit the Joint Entrance Advanced Registration Form on or before the deadline i.e. 02nd May 2017. For any of the queries concerning the Joint Entrance Exam Advanced 2017, you can contact us by commenting at the end of the post.