GITAM GAT Admit Card (गीतम एडमिशन टेस्ट एडमिट कार्ड) 2017: All those candidates who have applied successfully for GITAM Admission Test 2017 must be looking for the Hall Ticket of GITAM GAT 2017. As per the latest updates, we are concluding that the candidates will be called for the GITAM GAT 2017 Slot Booking between the dates 09th to 13th April 2017. After booking their slots successfully, candidates will be able to download their GITAM Admission Test Admit Card 2017 after 24 hours of slot booking, i.e. the admit card will be available from 09th April 2017 until the exam date (16th to 30th April 2017). This exam will be conducted by the GITAM University for enrolling the new admissions in the GITAM classroom engineering programs. 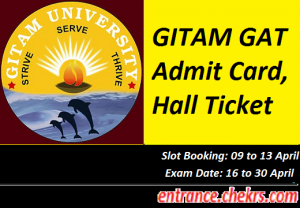 Candidates who have Students need to download the Admit Card of GITAM GAT 2017 from the official website of the exam. You need to carry the call letter at the exam center if any student doesn’t have the Admit card of GITAM GAT then that aspirant will be stopped to appear in the exam. The  Hall Ticket of GITAM GAT has the following details of students and exam such as- DOB of student, name of Student, Photo of Student, Sign of student, name  of exam, date/day of the exam, time of the exam, Time duration of the exam, exam center address, examination instructions. You need to read all instructions and follow them at the exam time. You also need to carry an identity proof along with the call letter of the exam, because there may be identity verification just before the exam.

GITAM Admission Test Admit card will be made available to those who have booked their slots successfully between the dates 09th to 13th April 2017. Candidates will be able to download their exam hall ticket after 24 hours of the slot booking. All the applicants are requested to carry the hard copy of the GITAM GAT Admit Card 2017 to the examination hall. The exam will be conducted from 16th to 30th April 2017. For any type of queries concerning the GITAM Admission Test Admit Card 2017, you can contact us by commenting at the end of the post, we will respond you as soon as possible.